Young Argentinian fans play in the streets of Sylhet, Bangladesh.

When Lionel Messi enters the Lusail Stadium to face France in Sunday’s World Cup final, he will carry the hopes of a whole nation with him.

Miles away in Bangladesh, ‘Messi mania’ has taken hold – and an army of ‘superfans’ will be right after him too.

So why is a country known for cricket and sitting at the bottom of the FIFA World Rankings between Samoa and Djibouti so passionate about Argentine football?

Like many conversations about the beautiful game, it begins with a name – the late Diego Armando Maradona.

“When he had the ball, he played with arrogance! We watched with ecstasy,” recalls 48-year-old Mashiur Rahman from his homeland of Kashiani in southern Bangladesh.

“Maradona created so much magic at a World Cup, we are all still fascinated.” 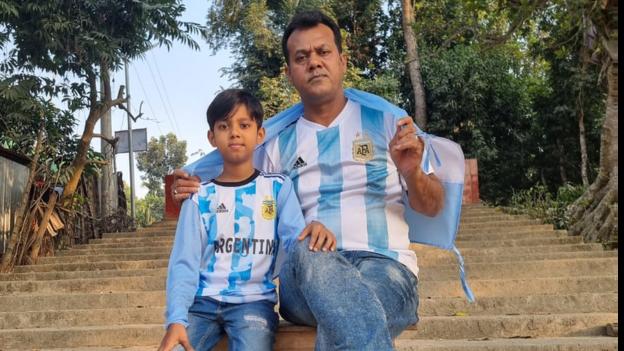 Mashiur Rahman and his son Nafi at home in southern Bangladesh

The first World Cup trophy to be shown in color in Bangladesh belonged to Maradona. In Mexico 1986, the 25-year-old created football folklore and scored the goal of the century. In Argentina’s second successful World Cup title run, he scored five times.

Mashiur was just 12 years old at the time and remembers that his family, like many others in Bangladesh, were ready to adopt a new hero without any success in football in their own country. The timing was perfect.

“Television was a big attraction in our house – we were fascinated by Argentine football,” he says.

“The moment I got to know football, I started supporting Argentina.” 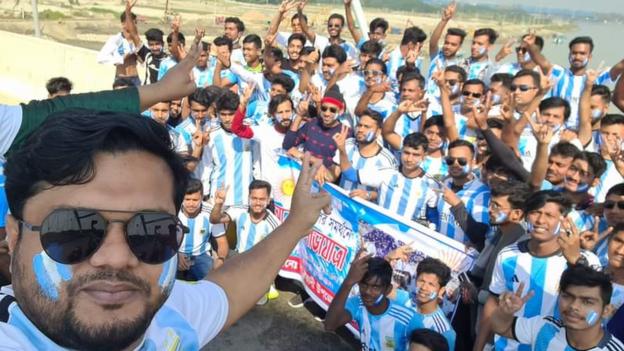 Fans in Kashiani, Bangladesh, celebrate after Argentina’s win over the Netherlands.

The two countries are not linked by direct flights and have very little in common, but football seems to bring them closer.

This is believed to be due to Bangladesh’s exuberant support on social media, which has skyrocketed after each Argentina win.

It’s a support that hasn’t gone unnoticed. Argentina head coach Lionel Scaloni thanked Bangladesh in a pre-match press conference and earlier this month the team’s official Twitter feed posted images of thousands of fans watching in Bangladesh and said: “Thank you for supporting our team. They are crazy like us! ”

Nowadays, Mashiur shares his “football legacy” and passion for the team, nicknamed La Albiceleste (the White Sky Blues), with his son Nafi.

But Nafi has a new hero.

If you visit Bangladesh today, it’s Lionel Messi’s face painted on murals on the streets of Dhaka and his shirt sold by market vendors. His fame is propelled to a new generation of fans through social media.

Messi’s supporters believe his destiny is to win his country’s third title.

“Maradona cannot be copied because of his aura, but Messi is close, Messi is special,” says Mashiur. 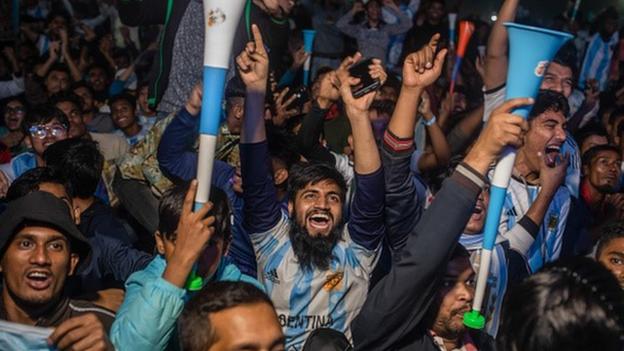 Mashiur will allow himself to think of nothing but Sunday’s win for Argentina. But there is still a lot to do before the final.

Throughout the tournament, fans in Kashiani were prepared to watch Argentina all night long as many of the games started in the early hours of the morning.

In Dhaka, tens of thousands will watch the finale on big screens – Mashiur has arranged three screens for more than a thousand people in his neighborhood, as well as large portions of the popular rice dish khichuri – a staple of every Bangladeshi picnic.

Now all he can do is wait, he says: “In Bangladesh, every Argentina fan can be sure of reaching the World Cup final.”