The Metaverse has become the all-time hottest concept in exchange-traded fund history — despite steady media coverage suggesting there has been little interest in the “sub-theme.”

According to data from Morningstar, 35 Metaverse-tagged ETFs have launched globally since they first rolled out in June 2021.

This beats the number for any other “sub-theme” ever according to the Morningstar classification, trumping the 32 for internet ETFs, 29 for blockchain ETFs, 23 for cloud computing, and 22 for cybersecurity.

The avalanche of launches has come despite an embarrassing lack of traction for many early offerings in the Metaverse – a futuristic immersive version of the web made possible by virtual and augmented reality.

Even Meta Platforms, which was so excited about the concept that it changed its name from Facebook to “reflect its focus on building the metaverse,” has started laying off employees associated with the project.

“We always envisioned that a variety of other funds would come out,” said Matthew Ball, a venture capitalist who created the index that backed the first and largest Metaverse fund, the $400 million Roundhill Ball Metaverse ETF (METV), underpinned June 2021 launched.

“We’ve always believed that the Metaverse is a multi-trillion-dollar, multi-decade opportunity. There wasn’t a scenario where we didn’t see a flood of other ETFs entering the market.”

In the wake of METV, a further 11 Metaverse ETFs were launched worldwide in the fourth quarter of 2021 alone, according to the Morningstar database; 23 more saw the light of day this year.

And the ETF industry is far from the only one licking its lips at the possibility of rapid growth. Citi predicted earlier this year that by 2030, the Metaverse could have up to 5 billion users and generate revenues of between $8 trillion and $13 trillion. Morgan Stanley projects $8 trillion each in the US and China independently of the rest of the world, while Goldman Sachs speaks of a $12.5Tn possibility.

Based on the World Bank’s GDP growth projections, that means the Metaverse will account for between 6 percent and 40 percent of global economic growth over the next eight years, Ball said.

“It’s the next-generation Internet. I would call it a major theme for the coming decades,” he added.

However, investors and the hoped-for early-stage users are likely to be less convinced.

According to Morningstar, net inflows into Metaverse ETFs totaled $2.6 billion between October 2021 and February this year. However, they have since gone negative with $111 million withdrawn. 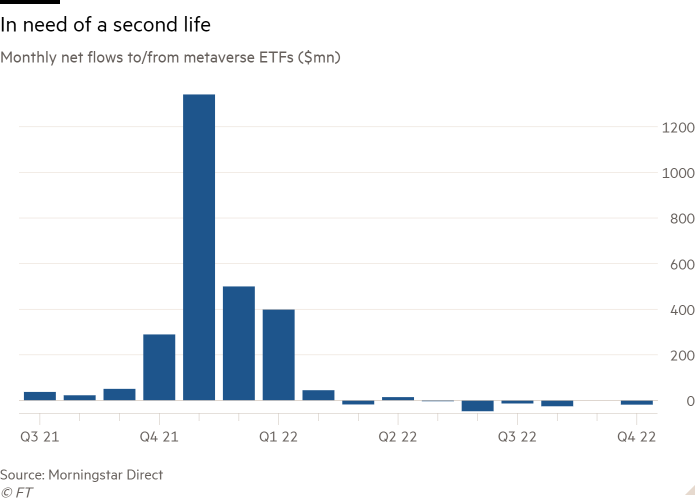 Valuations of underlying stocks were also caught up in the broader tech sell-off, with total ETF assets falling to $1.3 billion from a peak of $2.3 billion in March.

However, this reversal is unlikely to dampen industry enthusiasm for long. “There are more players watching the market and waiting their surfboard for the next wave,” Lamont said. 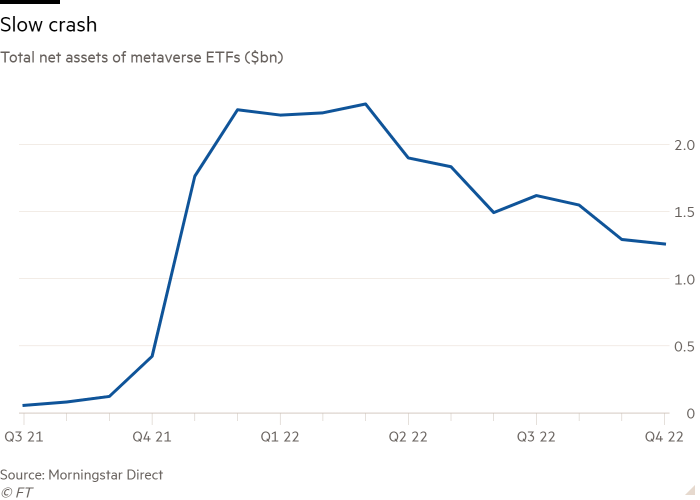 However, an obvious question is what exactly the metaverse is used for. Much of the initial coverage focused on consumer applications such as gaming and socializing.

However, Dina Ting, head of global index portfolio management at Franklin Templeton, which launched a Metaverse ETF in September, believes its true potential lies in combining the digital and real worlds to help the industry, something where we are “really on the threshold”.

For example, a company planning to build a new product could use virtual reality to perfect its manufacturing plan.

Ball agrees, pointing to early applications such as neurosurgeons at Johns Hopkins University using augmented reality to perform spinal surgeries, the US Army buying Microsoft’s AR headsets, and Tesla creating a simulation of San Francisco to power its self-driving to test systems.

“It’s about making the real world readable for software,” he said. “Most of the time it will complement reality, not replace it.”

Omar Moufti, product strategist for theme and sector ETFs at BlackRock, which launched its first Metaverse ETF this month, was even more enthusiastic, saying, “We see the Metaverse as the next leap forward in global communications and connectivity.”

However, given the metaverse’s rudimentary state, there seem to be few public companies to invest in.

“The story may be there, but the building blocks you can use at the public level may not be there. There’s definitely that tension,” Lamont said.

With the exception of Roblox, an online gaming and game creation platform, there are few obvious “pure play” holdings. Instead, many ETFs have large positions in larger tech companies like Apple, Microsoft, Nvidia, Tencent, and Taiwan Semiconductor Manufacturing Company, or their South Korean peers in the case of the many ETFs listed there.

“How much of these companies’ revenue will come from the metaverse?” asked Lamont.

Ball argued that things aren’t always clear cut: “The average investor would probably underestimate the importance of the Metaverse issue at some of the big companies. They have the expectation of trillions of dollars in revenue over the coming years.”

Nonetheless, Ball, who agrees that the metaverse does not yet truly exist, “expects that the composition of the [underlying] Index will change significantly over time.”

Despite the lack of Metaverse companies, Ting argued that the benefit of investing now is that valuations for tech stocks “have been pretty much discounted” and “the potential return can be hundreds of times.”

However, Lamont was more cautious. “There is no doubt [the metaverse concept] was enthusiastically received, but I think we should be skeptical.”

“We shouldn’t jump on a moving train as soon as someone starts [an ETF]. The concept of the metaverse remains relatively nebulous.” 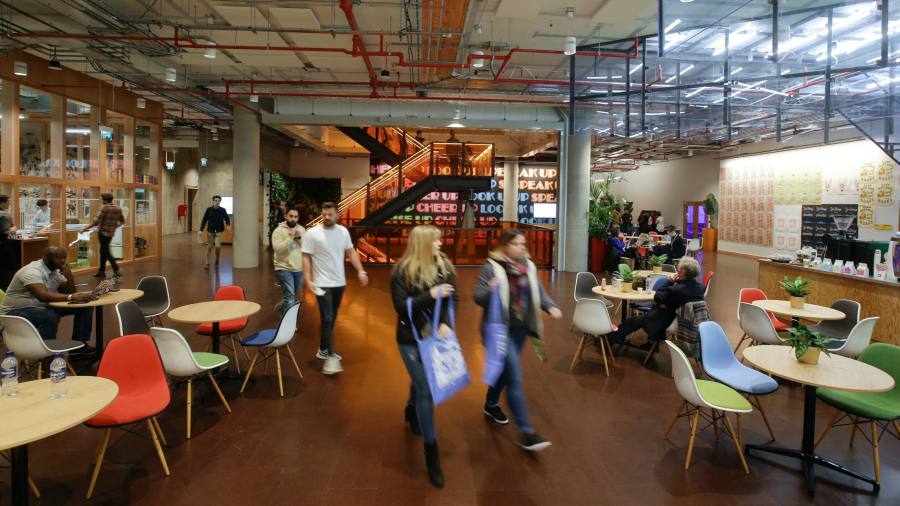 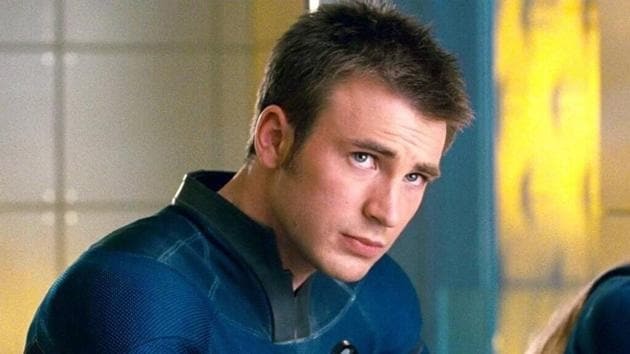