Four bodies were recovered in the Gulf of Thailand on Tuesday, the Thai naval chief said, after a naval vessel was sunk two days ago.

More than 70 survivors of the HTMS Sukhothai have been pulled from the sea since the ship sank around 37 kilometers (22 miles) off Thailand’s southeast coast late Sunday.

“I think it’s good news that we were able to find more people,” he said, adding that Chananyu is being cared for aboard HTMS Angthong.

Efforts to locate the missing crew focused on aerial searches, with the Royal Thai Airforce supporting the operation, which was hit by strong winds.

Rear Admiral Chonlathis Navanugraha of the Royal Thai Navy speaks next to a map of the search area during a news conference in Bangkok December 20, 2022 as military rescue teams continued their search for survivors after the warship HTMS Sukhothai sank in the Gulf of Thailand. – Rescuers in helicopters searched the Gulf of Thailand on December 20 for dozens of seafarers who went missing when their navy vessel sank, hoping life jackets had helped them survive two nights in the troubled waters. (Photo by Jack TAYLOR / AFP)

Concerned families of the missing have gathered at a pier in Prachuap Khiri Khan province to await news.

Siri Esa, the mother of 21-year-old Saharat Esa, who was on board, had a smile on her face when she heard about the recent rescue.

“I also have faith in my son. That’s good news,” she said.

Waves were still high on Tuesday, Navy spokesman Admiral Pogkrong Montradpalin said, noting that the search area had grown and was concentrating “on the area close to shore, according to currents and wind”.

Another naval officer, Narong Khumburi, had previously expressed hope that more survivors would be discovered as they had life jackets – “But I think they must be exhausted.”

Sahachart Limcharoenphakdee, a member of the National Institute for Emergency Medicine, said they were working with Navy personnel to tend to those recovered from the waters.

“I am hopeful and have faith in the Navy rescue team that is sent,” he said of the search for survivors.

Local doctors have performed health checks on those previously rescued, and some have been taken to the hospital.

Some “suffered from fractures in the upper arm and fingers,” said Wara Selawattanakul, a doctor with the provincial health department.

“I thought it would be fine and nothing bad would happen from the storm,” she said, adding that her son had asked her to take care of his wife before boarding. 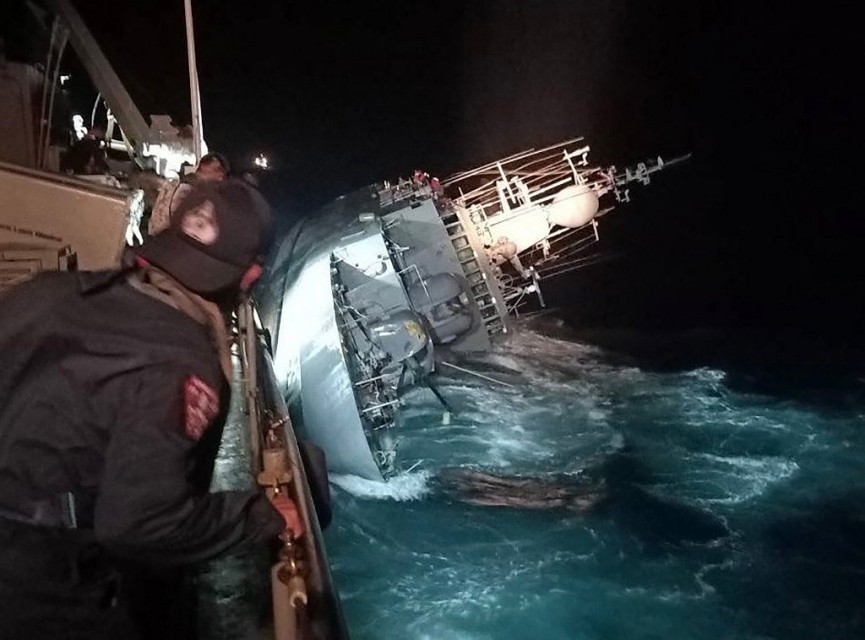 This handout photo, taken on December 18, 2022 and released by the Royal Thai Navy on December 19, shows the warship HTMS Sukhothai on its side before docking in the Gulf of Thailand off the coast of Bang Saphan district in the province Prachuab Kiri Khan sinks. (Photo by Handout / ROYAL THAI NAVY / AFP)

The ship – a corvette, the smallest type of military warship – is said to have run into trouble after its electronic system was damaged, according to the Navy.

Storms and flooding have hit parts of southern Thailand in recent days.

A warning from the Thai Weather Bureau remained in place on Tuesday that high winds were making for harsh conditions in the Gulf of Thailand. Sailors were warned to be careful and small boats were advised to stay ashore.

The HTMS Sukhothai was commissioned in 1987 and built in the United States by the now-defunct Tacoma Boatbuilding Company, according to the US Naval Institute.