Call of Duty: Modern Warfare 2’s multiplayer features standard 6v6 playlists and a ground war mode for large-scale combat. If you’re a new or returning player, the game can feel a bit overwhelming with fast-paced action and intricate weapon customization. Here are some of the best tips to help you succeed in Modern Warfare 2 multiplayer.

Don’t just stick with the game’s default settings. There are tons of settings for audio, visual, and input devices that you’ll probably want to change beyond the default options. Disabling settings like motion blur, film grain, and depth of field will help with visibility. There are also settings like changing the field of view to zoom out and see more information on the map. For console gamers, we have a recommended settings guide to get the most out of Modern Warfare 2 on Xbox or PlayStation consoles.

Use a headset if you can. This is a breeze for communicating with teammates, which is especially important in objective-based modes. However, there is also more accurate map awareness as you can better hear enemy footsteps to try and pinpoint their position. Listen for the change in footstep sounds to tell if the enemy is getting closer or farther away. A headset also makes it easier to determine if the enemy is walking on the ground above or below you.

Modern Warfare 2 offers 51 weapons to choose from, and there are plenty of weapon options to suit any playstyle. However, a good entry-level weapon would be the M4 assault rifle. In terms of recoil control, this is a really easy-to-use weapon that’s versatile across all maps and modes. You should level your weapons and get some attachments that will help you manage recoil and improve movement speed. For run-and-gun playstyles with weapons like submachine guns and assault rifles, you’ll need some attachments that improve your aiming speed.

Finding the perfect mix of attachments is a difficult balancing act of adding things that help with stats like movement and ADS speed, but without sacrificing the weapon’s overall accuracy. We have a recommended loadout guide to help you choose some of the best attachments for the M4 and other powerful guns. Also, here is a more detailed breakdown of how the Gunsmith and weapon unlock works in Modern Warfare 2.

Even if you’re familiar with Call of Duty, perks work a little differently in Modern Warfare 2. Perks are now bundled into “packs” of four. You can customize the perks you want in your customizable pack, but only two “base” perks are active at the beginning of the game, while both a bonus and an ultimate perk are earned as the game progresses.

It’s important to consider your playstyle, weapon of choice, and game modes you play when choosing perks for your custom packs. If you’re an aggressive player who likes to run and shoot, you might want Double Time and Overkill for your base perks, with Fast Hands and Bird’s-Eye for the bonus and ultimate perks.

If you’re new to Call of Duty or just want to play slow and more tactically, you can try Tracker and Scavenger for the base perks, and Spotter and Ghost for the bonus and ultimate perks. Spotter is a smart perk to use when playing Ground War as it gives you tons of information by highlighting all the enemy equipment, field upgrades and killstreaks on the map.

Here we list all of the perks in Modern Warfare 2 and their abilities so you can put together a package that best suits your playstyle. You can even customize a different pack for each loadout. You’ll likely want different perks when you’re working as a sniper compared to those moments when you might be rushing around with a submachine gun.

Choose your streak preference and the best streaks

Points based or kill based

In Modern Warfare 2 you can choose how you want to earn your streaks, meaning you can have killstreaks or scorestreaks. The choice is not tied to an advantage or disadvantage; You can simply choose how you want to earn the streaks. So just consider your personal playstyle here. If you’re a player who likes to play aggressively and rely on killstreaks, you can leave streaks on the default setting. However, if you prefer to stand back and play the aim, you might want to switch to Scorestreaks.

To choose between Killstreak or Score Streak, simply press the Right Trigger (R2) on the Killstreak menu to toggle between the two options. You can always change this choice between games, so there is no commitment. Here we list all the streaks available in Modern Warfare 2, along with the cost of killstreak and scorestreak options.

Best strips to use

Also, you should make some wise decisions when picking killstreaks. Some of the high-end streaks like the Chopper Gunner can be a lot of fun when you go to high-kill games, but if you’re new to Call of Duty or just struggling to get a streak, you should probably opt for the crucial decisions that either provide you with information or steal information from the enemy.

This means that the UAV, which is the least expensive series in the game, is actually one of the best to equip. It reveals enemy locations on the mini-map, giving you and your teammates awareness of the map. Personally, my first streak is always the UAV. 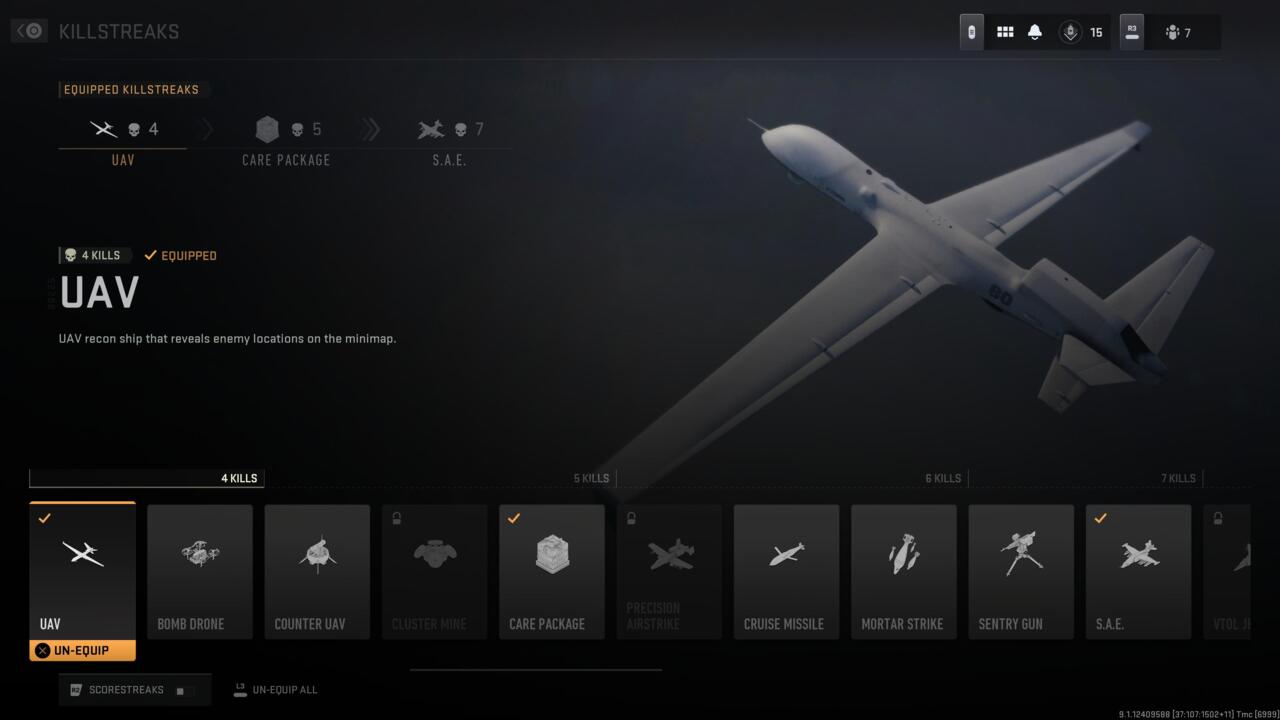 The Counter UAV is another helpful low-end streak, as it’s a drone that messes up the enemy’s minimap. So you temporarily take away your opponent’s card information.

The Overwatch Helicopter is another smart option, as the Helicopter will monitor your position and ping nearby enemy locations before attacking them directly.

Advanced UAV is a great high-end option as it gives you and your teammates an unassailable orbital UAV that shows the direction of each enemy on the mini-map in real-time.

Move carefully around the map

A key tip I always give to new friends playing Call of Duty is to work on the edge of the map. Simply charging straight into the center of the map puts you in the hot zone and puts you at risk of being attacked from multiple angles and by enemies. For example, if you just rush straight through the market center of Mercado Las Almas, chances are you’ll be immediately surprised by a snap. You are also much more likely to be shot in the back and overpowered.

Modern Warfare 2’s default maps are a good size for 6v6 combat, meaning you still have plenty of gunplay opportunities if you work from the outskirts and slowly work your way inwards. This gives you time to get more comfortable with gunplay and the maps to see where players like to hang out.

On the other hand, the ground war maps are huge. The best way to be successful is to find positions of power to shoot from. Verticality is so important on these large format maps. So if you’re wielding a ranged weapon like a sniper, assault rifle, or sniper rifle, you might want to find a turret or roof to get that overhead perk.

Hold your gun up

Modern Warfare 2 boasts an incredibly fast time-to-kill, meaning you feel like you’re erased from a gunfight in just a few bullets. To counteract this, make sure you’re aiming your weapon when moving through buildings, peering out of windows, and turning corners. Never hold your weapon down during these moves, because in the seconds it takes you to raise your weapon and aim for the sights, it’s more likely that every enemy you encounter will already be aimed and ready. 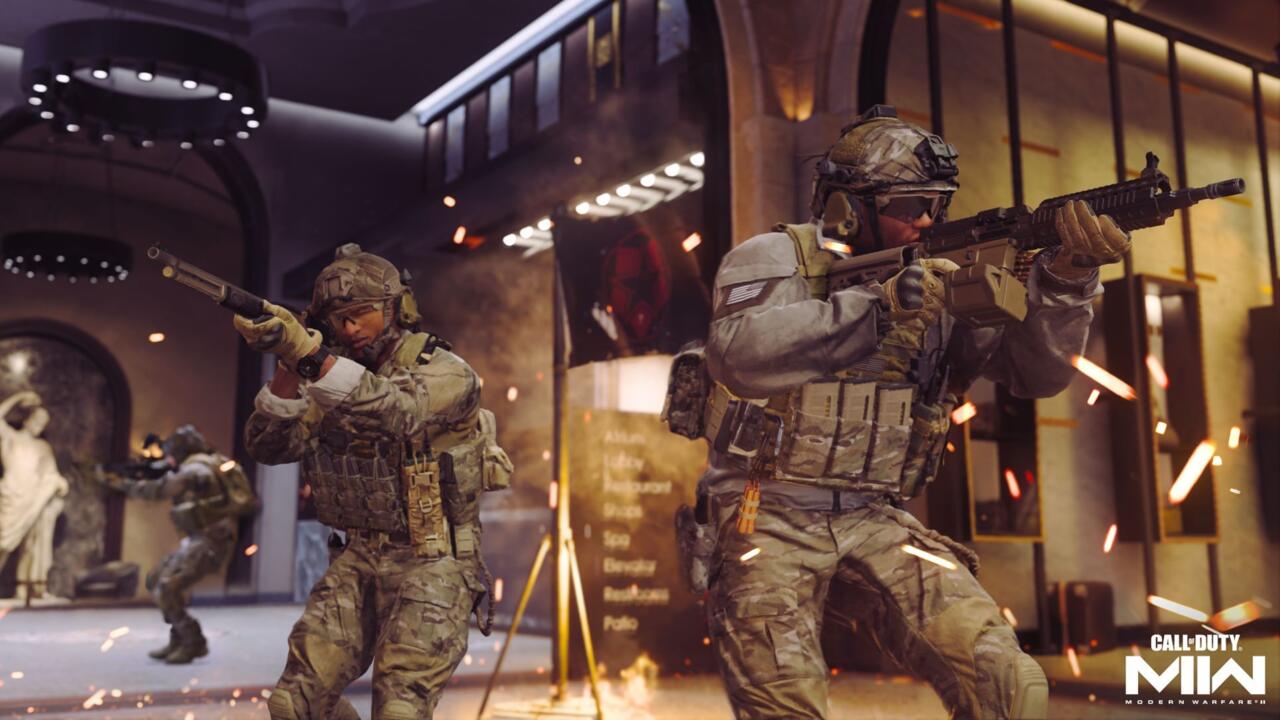 MW2 dominance in the hotel

Use your HUD intelligence

Enemies will not show up as red dots on the minimap when firing unsuppressed weapons in Modern Warfare 2, but you can still use your minimap for information beyond the UAV and Advanced UAV information.

It’s helpful to watch where your teammates (the blue markers) spawn. If you see that suddenly all blue dots appear at the opposite end of the map, it means that the enemy is likely to appear near you. Or if a blue dot disappears near you, then you know they just died from someone who might be nearby.

There’s also a compass at the top of the screen. This often seems to be overlooked by players, but this pings red dots for enemies firing their weapon. In most older Call of Duty games, you don’t have the exact location as you do on the mini-map, but you still have a general direction marked for opponents.

The compass is also good for communicating with teammates in objective modes, especially when playing Ground War. You can call out a general direction from enemy players and vehicles based on the compass.

(There’s also a ping system to tag enemies with the D-Pad, but the feature is currently disabled due to a groundbreaking bug.)

Even an experienced player can have trouble leading a team or random players to victory if no one is communicating or playing the objectives. Try to celebrate with at least one of two friends for a better chance of winning.

There’s also a nice 25% Weapon XP boost if you’re a PlayStation user playing in a group. So try to find a buddy to team up with to take advantage of the bonus XP here.